The 5 St Clement’s Road attic room was fully operational in 1986. TKFC were flying high but as we ruminated on the meaning of life it was music above all else that held the key to our existence. I had briefly dated a gorgeous Suffolk girl called Jaunty Julia, who in a giddy purple haze had one night uttered the immortal words ‘You will never be a heavy rocker’. That night after I was unceremoniously dumped, a new band, that threatened to rock the city of Manchester was formed. Sigue Sigue Sputnik were headlining the big Mandela Friday night slot at the Poly. Inevitably I approached Phil Korbel our Pulp newspaper editor and suggested provocatively ‘You need a support band, mate’. Korbel concurred. ‘Who are they, Socrates?’ ‘Oh, I have discovered Chopper on drums, Lenny Leinster on lead guitar and Simmo as lead singer’. ‘Bass guitar?’ he inquired. ‘Oh, that would be me on bass’ I replied. Dubiously he agreed. ‘Look mate, I can only give you fifty quid – we are paying Sigue Sigue a fortune’. ‘Come on, pal – seventy five nicker plus drinks’ I reposted. ‘You are getting a bargain, my friend’. Friday night came, and Lenny who we had spotted in a biker’s club in Leeds had never been more ready. The Kyle-Simmons Band were about to launch, despite the fact that we had never rehearsed. Our influences included The Ramones, Jilted John and Debussy. Sadly at the eleventh hour the gig was cancelled but it didn’t stop Sigue Sigue Sputnik smashing straight into the Top Ten and then disappearing like Kajagoogoo. I took solace in the fact that the attic room had still not been penetrated by the softlads, Safeways were selling double-size strawberry yoghurt at 39 pence a pop and Spiffing Images design were about to be born. I also read some of the lyrics that were supplied during this chips and gravy period, including top songs like Digby Dawkins and Strawberry Fields Decayed, composed during the darkest hours betwixt and between Longsight and Great Ancoats. Nothing had been lost – in fact if you understand music, you have a slim chance of understanding a fraction of life. Several years later The Stone Roses broke through with riffs that sounded remarkably familiar.

Adjoining the front attic bedroom at St Clement’s Road there was a small ante-room which most of the time I was there remained rammed full of furniture, pieces of cot and long-forgotten baby apparatus. But between the mattresses and leftover Christmas detritus, for a few hours, before risking permanent disability, you could curl up reasonably-comfortably in a foetus-like position and escape the world. Top digital advertising agencies these days pay good money to have such environments built for their creatives. It was a handy place to reteat if one of my roomates was snoring particularly violently or was liable to urinate on me. It was also a good spot to evade the softlads. If one came a-knocking and you didn’t want to banter ‘Sorry pal, I’m working on my dissertation’ was always a good line to get rid of them. It would indeed have been the ideal en-suite studio to do any artwork but there was no light or any flat surface on which to put down paper. It was though perfect for daylight hour creative thinking. Can you imagine that a few miles down the road at Factory Records, Tony Wilson and Ben Kelly were wasting a million quid on such a concept? Sometime around 84-85 there were vague plans to turn it into a photographic dark-room, the junk was cleared out and a desk installed. Inexplicably Ashley’s Safeway trolley was retained. It was at this point that the master-stroke occured to turn the face of Sam the Dog into the greatest canine branding concept since Lassie. Bone Idol Promotions was born. For a while it was also the headquarters of Teenage Kicks. From this tiny forty-five degree roofed hideaway, many an audacious signing was plotted and tactics deployed next day behind the church were talked long into the night. The original sign on the door, hand-rendered in magic marker is now a highly-valuable collector’s item. Ever restless, we wanted to broaden our operations base and the tiny space became the home of The Voice magazine. Not a lot of writing was done admittedly, but there was a great deal of listening to music and informed debate, particularly now that straight outta Leeds, a style icon and bass guitarist of reknown was across the landing. The Lenny Leinster era was upon us. The main competition at the time seemed to be based in the south, credibility was vital, so it became important to set up a base there. Ealing, a leafy west London suburb was chosen. Its ready-supply of fresh juice, au pairs and access to the start of the M1 gave it the edge that any alternative needed in those ultra-competitive image-is-everything days. We apppointed Tony Beresford to take control of operations down there and the rest is history. Now hear The Voice. 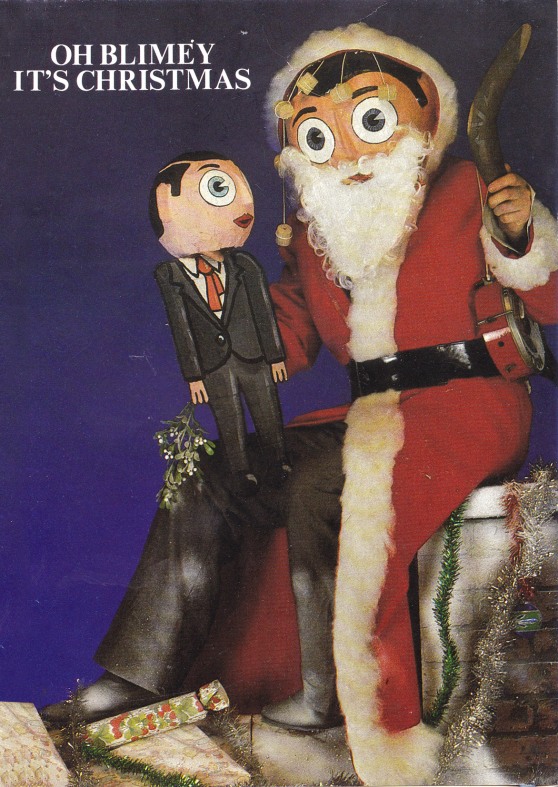 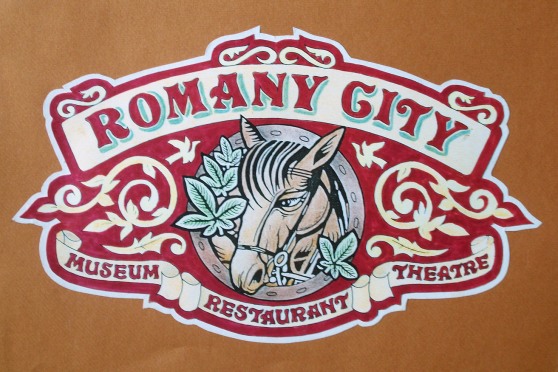 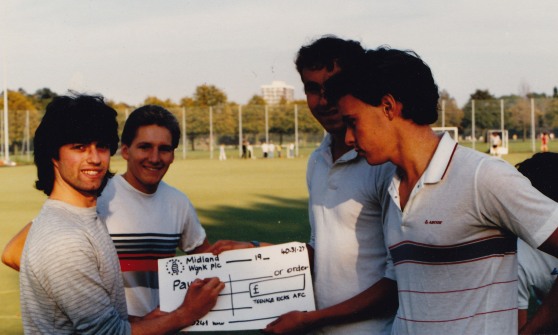 In this year of death and bad, mad days my mind has often wandered back to Platt Lane, a place redolent with sunshine freedom and hope. Now when you see the Platt Lane complex on your iPad, complete with shiny confident youth in expensive tracksuits being led out by Patrick Viera, you see too many hangers-on. However in 1985, it was hardcore only. The one mile walk past red-brick Manchester terraces from Mad Dog’s new £13k Moss Side home was always memorable. Blue skies, the smell of freshly laid tarmac, the pungent aroma of over-grilled kebab meat spirited you along and suddenly all the roads widened as you approached Platt Fields. Man City’s magnificent 55,000 capacity stadium Maine Road wasn’t far away and the football buzz was palpable. Although the legendary TKFC fronted by the imperious Solly Musseltoff were not short of a bob or two, floodlit Astroturf pitches plus hot showers and changing rooms were pricier than the gravelly back-yard of St Clement’s Church in Chorlton where TKFC was spawned. This was a big match. Fine Art FC were led by a Peaky Blinder from West Bromwich called The Amazing Waldo who made Thomas Shelby look like a pussycat. They were a crack group of radical Hulme-dwelling refusniks who in the face of encroaching Thatcherism were not prepared to simply roll over and die. Through Churchillian folly, they had lost Grandfathers and Great Uncles at Gallipoli. They knew that there would be some Business Studies capitalists lining up against them and this was the moment to avenge Cape Helles and Orgreave. Saturday came. Chrissie-boy Rowlands, a rugby star and fellow parachutist drove us to the ground in his sleek fuel-injected Triumph Dolomite. Incredibly, seven fans had materialised including Fantasy Bob and Curvaceous Christine. They were privileged to witness the audacious pre-match signing of Ricardo, from Buenos Aires via Blackburn. His good looks, artistry and easy way with the local press made his signature a major coup. In fact, a carnival atmosphere had developed within the high fences of South Manchester’s astroland as TKFC’s brave and virile eleven took to the pitch. Fine Art FC with a glint in their eyes were already warmed-up and bristling with menace. Barry White their denim-clad supremo prowled the touchline and snarled at Sam, scowling at us with a menace not seen since Arthur Scargill faced up to the South Yorkshire Constabulary. But we were young and fearless. Ricardo notched early doors with a deft Kempes-like flick. Stick it up your junta, boys. But the Amazing Waldo showing the predatory spirit of Tony Bomber Brown responded with a far-post header. Chrissie-boy and Socrates patrolled the midfield with élan, yet it was the lanky and bronzed Simmo who caught the eye upfront, peeling off defenders at will. The Fine Art back four were in disarray and with typical aplomb he scored just before half time. Monsieur Le Shark handed out the half-time oranges and proceeded to give us a pep-talk straight off his leadership and influencing people module at Manchester Polytechnic. If truth be told, we didn’t need it. We smelt the Medlock boys blood and despite the indefatigable Waldo scoring another from Impressionist John’s left wing cross, Simmo ran riot. A can-opener splitting 40 yard pass from Socrates released the Kilskeeryman who nonchalantly toe-poked into the net. Fine Art briefly rallied again as John Ferrari showed why he was once labelled Crumpsall’s Paddy Crerand. But TKFC’s fourth and final goal was from Simmo again. A slick interchange with Socrates and Ricardo climaxed in a 25 yard screamer past the luckless Vincent Van Driver in the Fine Art goal. It wasn’t simply a peach but the full Del Monte canning factory. The hat-trick hero ran off the pitch and clambered over the steel railings. His celebration lasted at least five minutes and involved Christine, Beano Bob, several Chinamen and Sam the Dog. The crowd now in double figures watched on in amazement. Joy filled the streets of Fallowfield. As the hot water from the luxurious showers pummelled our aching limbs post match, we knew we would never see another celebration quite like it. Strolling home in the bright sunshine towards the Parkside pub I was filled with the indelible feeling (almost a portent) that the Russian proverb would stay with us right up till the dog days of 2013. Hope is the last to die.