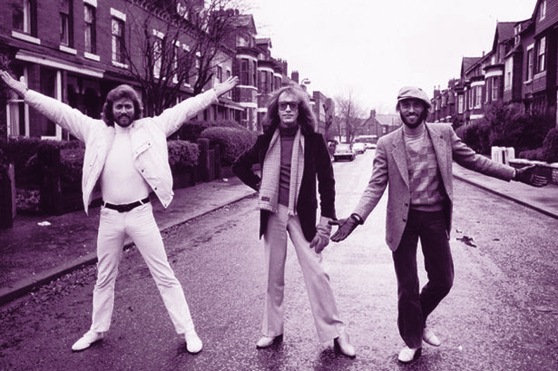 I’d only been in Manchester a couple of months when Janice told me that The Gibb Brothers, Maurice, Barry and Robin were visiting their old Chorlton-cum-Hardy stamping ground and specifically the Oswald Road Primary School that her three children attended. It never dawned on me where they were from, but right enough, their accents were as thick as Len Fairclough’s and they came back on numerous occasions to the place where they honed their unique and special talent. Apparently they’d lived in Keppel Road, right next to Albany Road, no less and as little boys performed regularly at the old cinema next to the snooker club behind Safeway on Barlow Moor Road. Gustav’s Polski cake-sklep was just round the corner and it is easy to imagine the budding master-baker slipping down Keppel Road on his way home with a tray of cakes. He might even have been ambushed en route by the young Gibbs, keen to relieve him of his cream horns and vanilla slices. Seemingly the boys were getting into a few scrapes and although Harold Macmillan was telling everybody they’d never had it so good, Mum and Dad weren’t too keen on the climate. When baby Andy came along they wisely jumped ship to Australia, though not so sensibly heading for mosquito-infested Brisbane. All that scratching drove them back to the UK and on the road to shifting several hundred million records. Along the way, one of them married a girl I went to school with. Kilskeery is a tiny village on the Fermanagh/Tyrone border, two rows of houses and a church. The future Mrs Robin Gibb was brought up in one of them and once a car pulled over when Mum was walking up the road. The window wound down and she had a chat with a Bee Gee. In fact all the ladies in the Mothers Union were once piled onto a coach and sent to Dublin to watch them perform. Back to Manchester in the mid-eighties, Keppel Road was teeming with student life. I briefly had a girlfriend who lived there, quite possibly in the house where the young Gibbs practised their harmonies. One fateful Friday I went off to London to watch football but came back to hear reports that she’d been seen canoodling with another in The Royal Oak. Tragedy. When the feeling’s gone and you can’t go on, its tragedy. When the morning cries and you don’t know why, its hard to bear, with no-one to love you, you’re going nowhere.

One thought on “Keppel Road Tragedy”