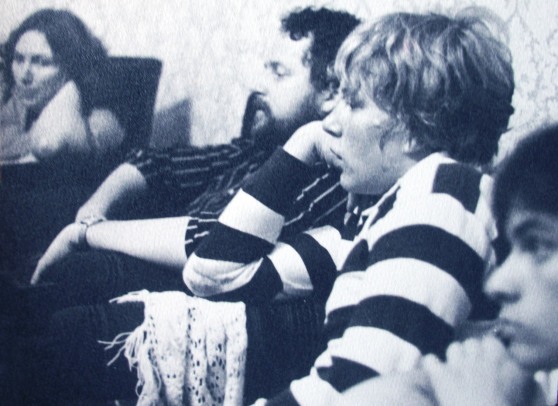 After tea if we weren’t rushing off to collect pots or get back to our studying we’d settle down in the front room to watch a bit of TV. Orders would be taken for the evening brew and we’d lounge on the brown upholstery and kick back for a feast of early eighties viewing. My strongest memories are of the shows I never really watched but were always ‘on’. American imports such as The A Team, Dallas, Fantasy Island, Quincy and Magnum PI. It was all big moustaches, tropical shirts and gravelly voices. Weekends were ‘Game for a Laugh’, the Saturday night trickery that bought Jeremy Beadle to the nation’s attention and the truly dire ‘Three, Two, One’ which I always associate with eating kebab-meat from Beech Road. ‘The Young Ones’ was popular with a few people but funnily enough it did nothing for me. The real deal was happening a few streets away in 25 Albany Road and was much more fun. I don’t recall much news coverage because we had our noses stuffed in the chilli trough at that moment, but Tony Wilson and Stuart Hall were the big local anchormen. I had a secret passion for Selina Scott and she sent me a signed photo after I wrote to her. Even in those days most telly was trash. There was hardly any football and day-time TV only really kicked-in around 1986. Current affairs was all pretty dull and uninspiring, we got most of our politics from Spitting Image. Janice held sway over the remote control, assuming such a device existed and Coronation Street was banned. St Clements Road was in fact a soap-free zone. The ‘must-see’ programme which I remember we all made an effort to watch was The Kenny Everett Show. He seemed to tick all our boxes and we usually ran out of seats which somehow added to the sense of occasion. Hard to believe in this multi-channel digital age but we all got very excited when a FOURTH channel started up in the autumn of 1982. ‘The Tube’ was a big favourite but it was on at an awkward time. ‘Countdown’ was famously the first ever programme on Channel 4, but its a huge myth that every student slobbered over Carol Vorderman and downed their pencils when it came on. I don’t recall that happening until a few years later. Then, at the height of the Thatcher boom we all went crazy for a programme called ‘Howard’s Way’. It was all money, shoulderpads and evil southern entrepreneurs storming round the Solent on their jet-skis. With his figure-hugging pastel knitwear and man-jewels, the perma-tanned lady-magnet Ken Masters was the man we supposed despised but all secretly wanted to be. That’s when we weren’t dreaming about the equally noxious ‘New Statesman’, the Honourable Alan Beresford B’stard MP.