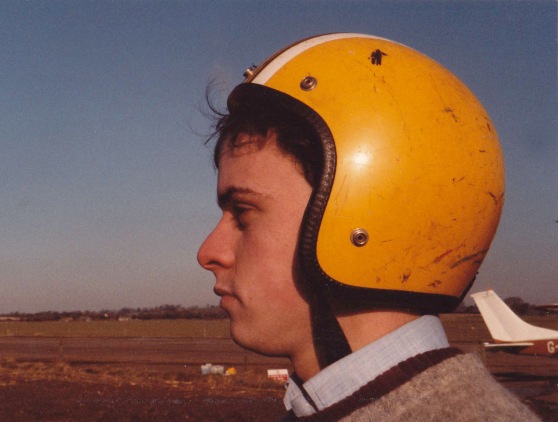 Jester Jane arrived as she departed in a tornadoesque flurry of frisson and anticipation. She was that rare thing amongst the human species, being gifted with spontaneity and a substantial element of danger. We had decided to liven-up our humdrum Chorlton existence with subsidised parachuting. As soon as our instructor Mr Joe Diamond called us a couple of feckless bloody students, we were determined to become the finest paras since Monty Woodbridge of SOE dropped into Crete in 1941. There, on a Shropshire airfield in a corner of middle England, we met Jester Jane. I cannot see her doing any of the training drills now, she seemed to transcend all that. Instead it was her fire-engine red Peugeot 209 GTI with go-faster stripes that caught my eye. ‘Jump in boys, gotta go to Mold first, then Stone’. Roaring down those narrow country lanes with such carefree élan gripped us both inside. Oh it felt so good. Suddenly I realised why philosophers and theologians spend so much time on mortality and why-are-we-here conundrums. It was a rush, a fearless sense of liberty. Jane was going out with an international rower called Richard Fox at the time, but there were clouds on the horizon. ‘Just dashing into the house’ said Jester. Some minutes later she returned ashen-faced. ‘Look at this postcard from that tart to Richard. What is she up to?’ It was from a young attractive tennis player called Annabel Croft. Jester looked perturbed. Seconds later we were hurtling round hairpin bends and slaloming our way through Wem. We were slaves to the rhythm of Grace Jones.‘Pull up to the bumper baby’. After a delicious ploughman’s and pint of Shropshire ale we were back in the motor.’My Jamaican guy, oh oh oh’ blasted out of the boom-back speakers and frozen in a nano-second of time, a joyful cocktail of adrenaline and pure unadulterated happiness coarsed through my veins. It didn’t last. Chrissy-Boy Rowlands joined us in two successful jumps. Out of the blue, there was Shropshire sunshine and a post-para celebration at his Dad’s pub in Rosset that is still the talk of North Wales. Will we ever see Jester Jane again? Glorious student days inevitably came to an end and we all moved into Mad Dog’s twelve grand Moss Side terrace house. A year later we threw a party. Jester had a cool girlfriend, Susan. She had dark hair, beautiful shimmering green eyes and a white BMW 323i. She was a jeweller and the epitome of style. I fancied her from afar. I’d only met her briefly but knew she was way out of my league. Then Saturday came. Fired up on Thunderbird wine and kebabs from Mustafa of Moss Side I was in the mood for anything. Just before midnight, like maniacal pirates,in burst Jester Jane and her friend. They were on fire and electricity fizzed through the tiny terraced house illuminating the cavernous Moss Side bus garage next door. Commie Ken, formally known in the People’s Democratic Republic of China as Mr Shunghua-Xia had been a little edgy all evening and eyed them both suspiciously. The vigilant Mad Dog patrolled his property and followed them into the kitchen for questioning. Not long after there were squeals of astonishment from upstairs. While most guests were quaffing, Jester and friend had trashed the bathroom, spraying shaving foam all over the mirror and walls. Their message expressed their undying love, unbelievably for me. Ken was the first to react. Three days earlier he had been badly stung when after a knock on the door, he naively let in a slimey TV license officer who promptly handed out a £400 penalty. Commie Ken was über-defensive. Mad Dog had been informed of the attack and as the lights came on, Ken announced to a baffled and bemused throng of revellers ‘This is a respectable household. Vandalism is not acceptable’. The room fell silent. Jester and Susan slipped out through a back ally and revved up the car. Before they raced off she threw open the door and furiously beckoned myself and The Kid. Everything froze. For a moment we contemplated joining them and disappearing into the Moss Side night but Jester sensed our hesitation and the door closed. With a furious squeal of brakes they were gone forever and the path to a lifetime of conformity and convention beckoned. In all my life I have never witnessed such a getaway.